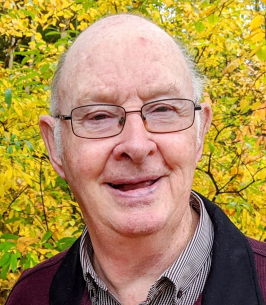 The family announces with great sorrow his death, surrounded by family, on Wednesday July 20, at the age of 80 years old.

George was born in Kirkland Lake, grew up in Haileybury, and moved to Timmins in 1973.
He has many friends from his working days at the Kidd Creek met site. He more recently spent his retirement days helping his wife who worked for Carlton cards in various retail locations.
George was a family man. He was a caring, gentle soul who extended a helping hand to anyone that needed it. He loved his five grandchildren. He enjoyed spending time with them, attending sporting events, being their taxi driver when needed and just being a big part of their lives.

George was a competitive person. He took up golf at an older age and most likely bought every self help golf video on the market to give him an advantage. He enjoyed playing with his buddies at the Spruce then more recently at Mahoney. We're sure many of his golf buddies who are no longer with us would be waiting for him on the first tee at the great golf course in the sky!
George also was an avid curler. He was honoured and proud to represent northern Ontario at the Brier twice! He loved fishing for walleye with his son and son in law, everything was a competition so you better catch the first fish or you might be buying lunch.

Cremation has taken place and a celebration of life will occur on Thursday August 18, 2022 at the home of his daughter Sherry. 110 Cooks Lake road between the hours of 1-4 pm. Funeral arrangements are entrusted to LESSARD-STEPHENS Funeral Home.

In lieu of flowers, donations can be made in his name to the Timmins and District Hospital Foundation.