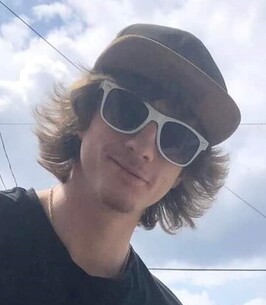 It is with profound sadness that the family announces his sudden passing on Thursday, October 13th, 2022, in St-John, New-Brunswick at the tender age of 21. Hunter passed away due to an automotive collision while doing what he loves most, riding his BMX trick bike. Hunter was the pride, love and joy of his mother Josee Corbin (Terry Petersen). Loving brother of Kassidey Corbin (Denis Belec) and favorite uncle to his niece Harper Grace Corbin-Lavigne. He will forever hold a special place in his best friend and fur baby’s heart, Cooper Seguin. Cherished grandson of Marielle Corbin and Guy Seguin. He will be greatly missed by his aunts, uncles, cousins and friends. He is predeceased by his father Ernest Seguin, his grandfather Jean-Guy Corbin and by his grandmother Diane Seguin.

Hunter was known as a jokester. He had a great sense of humor and always knew how to put a smile on someone’s face. As a selfless young man, he touched the lives of so many people and was loved by all. He had a passion for BMX and would always try new tricks any chance he had. It was his true passion. Not only was he full of life and humor, but he was also full of love. He devoted his life to his dog Cooper. Those two were an inseparable pair. Hunter also cherished the special relationship that he shared with his niece Harper. He valued every second that they had together and was always excited for the next time that he would get to see her. After some obstacles in his life, he wanted to make a change to better himself and start fresh. He made the decision to follow his dreams and move to New-Brunswick. He met so many wonderful people over there who took him in under their wing, encouraged, helped and guided him to become a better version of himself. Hunter came a long way from the person he was and that will not go unnoticed.

The family would like to thank Hunter’s friends in New-Brunswick for all the things that they have done for him. They would also like to acknowledge all the support that they have received from family and friends. At this time, cremation has taken place. A celebration of life will be planned and held at a later date. Remembrance donations to the Humane Society or a charity of your choice would be greatly appreciated.