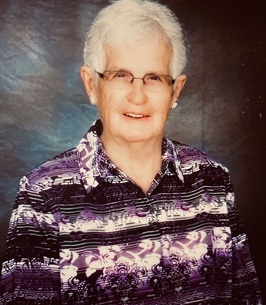 It is with heavy hearts that the family announces the peaceful passing of Mary Monaghan at her home in Schumacher at the age of 92.

Survived by her loving daughters Nancy Monaghan of Duncan, B.C. and Lyn (Birger) Myraas of Vernon, B.C. Cherished grandmother of Erin (Dany) Lavoie of Cochrane, ON and Cory Myraas of Kelowna, B.C.
Treasured Gigi to her great-grandson Deegan Lavoie.

She also leaves behind her sister-in-law Lucy Bernier, along with numerous special nieces, nephews, great-nieces and great-nephews from the Bernier and Monaghan families.

She is also predeceased by her parents Joe and Annie Bernier, her siblings Tom (Lucy), Geraldine (Frank) Fasano, Raymond, Florence (Guy) Belisle and Basil (Jeannine), as well as several nieces and nephews.

Mary will be fondly remembered by her lifelong friends Arlene Marshall and Claudette Fregonese, as well as her retirement buddy Helen Forrest.

Mary left her hometown of Cochrane, ON in 1948 to train and pursue a nursing career at St. Mary’s School of Nursing. She graduated in 1951. She was subsequently employed by St. Mary’s Hospital that year and worked on a casual basis, until she married Buck in 1953, and started a family.

When her brood of 3 were all ensconced at Schumacher Public School, her career began in earnest when returned to St Mary’s Hospital to work in Maternity/Nursery Dept.

Thus began a lifelong love of newborns and babies which culminated after 23 fulfilling years until her retirement at the age of 61.

However, she wasn’t finished yet. She was approached by the hospital to head a volunteer committee for a program called Snuggles and Cuddles, which allowed her to extend her TLC and expertise to newborn boarders in the nursery.

She passed that torch on after 25 years. In conjunction, she volunteered at the Cancer clinic for 13 years and in 2014, she humbly received the Volunteer of the Year Award and was celebrated at a dinner.

Mary also spread her love and knowledge of babies to anyone who called upon her. This included pet-sitting fur babies.

Our Mom was a funny, feisty lady who had a joie de vivre and a healthy curiosity. She enjoyed many wonderful relationships with people in the community, her co-workers and fellow church goers.

Her rich life included many hobbies. She loved to read, kept her hands busy knitting, working her mind keen doing crosswords, puzzles and playing games. She was the oldest and perhaps the most competitive member of her ladies card group.
She loved to walk everywhere. You would often hear cars honking at her or stopping to offer her rides when she walked along the Schumacher highway.

Mary was an avid sports fan, attending local and out of town venues throughout her life. In her later years, she became an armchair spectator and especially enjoyed watching the Pittsburgh Penguins and “Sid the Kid”.

Her travels took her to Florida and across Canada, especially to B.C. She dipped her toes in both the Pacific and Atlantic Oceans. When long distance travelling, she would be curled up in the back seat of the car with her eyes closed driving through the mountains.

However, her most cherished vacation time was spent at her beloved “Hers Place” at Highway Beach, ON, her home away from home. The multi-family compound grew over the years where the Bernier clan and their friends would converge and embrace all aspects of cottage life.

Mary had many fond family memories of her early years growing up in Cochrane, ON. Throughout school, she was active in team sports, was a competitive swimmer and worked as a lifeguard and as a soda fountain clerk. She also had a special relationship with Tim Horton.

As an adult, she embraced her life in Schumacher planting seeds that took hold and blossomed over 70 years.

There are also many professional people to thank for their support over the past month: Dr. Auger, Julie Seim from NorthEast Specialized Geriatric Centre, the NorthEast local Health Integration Network, Bayshore, the Community Paramedicine Program, and the Timmins Integrated Palliative Care Team, with a special thank you to Connie (P.S.W.) and Tina (R.N.)

A Mass and a Celebration of Life will be announced at a later date. Funeral arrangements have been entrusted to LESSARD-STEPHENS Funeral Home. Remembrance donations to the Timmins and District Hospital Foundation would be greatly appreciated.

Rest in peace Mom, we’re sure you were welcomed to heaven with open arms. You will be forever loved and always remembered.